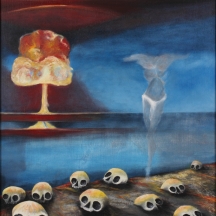 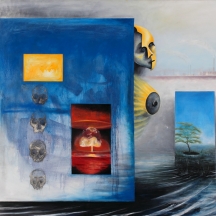 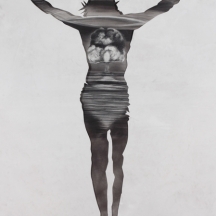 Kilotons and then more by Carlos Cumpian

Kilotons and then some Bombs on hot and crowded Nagasaki and Hiroshima. Bombs on hated Hai-phong harbor and Hanoi. Bombs on the Caribbean jewel Puerto Rico for almost a century— Bombs on the presidential building of socialist Chile in ’73. Bombs off Mexico’s Veracruz, shot by U.S. Marines in 1914. Bombs over the once many starfish of now–radiated Pacific isles. Bombs over thee Buddha’s blood fields in Cambodia. Bombs over Christ’s homeland of Palestine. Bombs over the cactus and lizards of the New Mexican desert. Bombs under the Nevada oasis scattering Las Vegas. Bombs under the Utah Mormon paradise. Bombs with no markings sold to those with no future. Bombs under the Mongolian Gobi desert. Bombs under the Siberian rock ice. Bombs on the heads of Afghanistan. Bombs with Moslem moon and star of Pakistan. Bombs with designer shades from France. Bombs with mantras and incense reincarnates India. Bombs from David’s six-pointed star into Iraq’s oil rigs. Bombs with red stars over rich rice fields of Asia. Bombs with question marks from South Africa’s white elite. Bombs with passages from the Koran canned in Libya. Bombs from the 14th century of lonely Iran. Bombs from the ill-reputed saint of North Korea—Kim Il Sung. Bombs with no consideration from his Cousins in South Korea. Bombs of the underdeveloped nations Just laying around. Bombs of the present and former Super Powers leaving them dumb. Bombs of the captives getting louder, Bombs of the captors making them captives. Bombs with names such as: Trinity, 666, Little Boy, Blister Buster, Heavy Metal—Bar-B-Qued. Bombs blessed by drunk church sinners with sweaty palms. Bombs with no chance of ever learning a trade. Bombs four days old on the discount table. Bombs the kind you’ll never see. Bombs the ones you only have to listen to once— And you’ll never hear again.

Carlos Cumpian is a Chicago poet